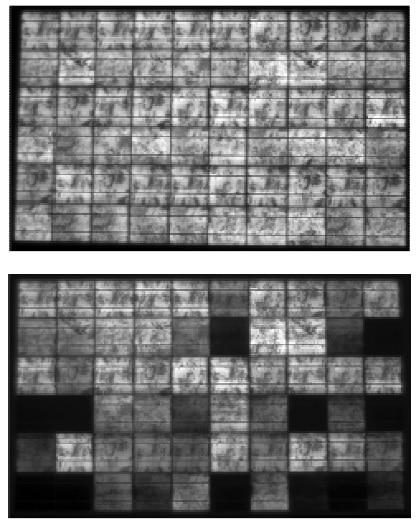 What is a PID?

PID is a phenomenon that affects photovoltaic panels and leads to a reduction in their efficiency which starts gradually, but evolves rapidly. It comes from the initials of Potential Induced Degradation, which means Voltage Caused Degradation. As the name of the phenomenon states, this is a reduction in the efficiency of photovoltaic panels due to the potential difference (voltage). In an interconnected photovoltaic system, the panels are connected in series one after the other, creating strings. The total voltage of a string can be close to 1000 V. So this is the high voltage that can lead to the PID effect. Figure 1 shows the mechanism of its creation. In essence, due to the high voltage, leakage currents are created from the solar cell to the aluminum frame, through the glass and the encapsulation materials of the cell, which under normal conditions are insulating.
The result is that the power of the photovoltaic panel is reduced. The power reduction can be even 40% or more!

According to studies and research so far, the phenomenon is intensifying in conditions of high temperature and humidity. This means that the climatic conditions of our region favor the occurrence of the phenomenon.
The phenomenon had been observed since 1979, only in 2005 it began to occupy the photovoltaic industry as it was initially observed in the context of high efficiency of Sunpower [1]. In fact, it was then mentioned in the literature that the phenomenon affects only high-efficiency cells. With the great development of interconnected stations in recent years, the phenomenon began to receive due attention and better studied, especially after 2007 [7] where it appeared that the phenomenon occurs in standard photovoltaic crystalline panels [7], [8 ]
It is characteristic that until recently there was no international standard or any relevant certification in order to test the resistance of various PV panels to this phenomenon.

Already an international consortium led by Dr. NREL’s Peter Hacke is working on the development of the IEC 62804 standard for PID testing. The first version of the standard is expected to be followed by its adoption by international certification bodies,

Is there a cure for PID?

If we are talking about a new installation, it would be advisable for someone to use photovoltaic panels with material specifications in order to withstand the PID. Recently, several such frames have been circulating and despite the possible increased costs, they are worth choosing.
Questions are raised about systems already in operation. It is therefore important to note that in most cases the PID effect is reversible, as long as it is detected in time.
Irreversible PID occurs when due to electrochemical reactions that lead to corrosion and / or detachment in the frame. Irreversible PID mainly affects thin film frames.
In crystalline silicon photovoltaics, the PID effect is reversible [2], [4]. The phenomenon is reversed either by grounding one pole of the frame string (if the inverter allows it) or by changing the polarity of the string. The second method is also the most common, as usually the first is not allowed by the inverter.
Special PID rejuvenation devices are already on the market, which apply an inverted polarity to the string either continuously or during the night when there is no production.
The cost of these devices is not high and it depreciates quite quickly in case of PID infection.
The “recovery” time of a photovoltaic panel that has been recruited by PID is usually half the time it took to be infected.

Is the PID easy to understand?

It is especially important to detect the PID infection in time as on the one hand if it is not detected in time there is a risk that there is no cure, and on the other hand the recovery time is a function of the infection time.
The phenomenon in its early stages is not easily understood, except with the use of idealized instruments. When the phenomenon expands, then it is perceived even by the dramatic reduction of the production of the photovoltaic station. But then it may be too late.
Measurements used to detect PID are [5]:

Figures 2-4 show examples from real cases of photovoltaic panels in Messinia that have been affected by PID.

As always prevention is the best treatment. The PID effect can “affect” any photovoltaic system. Fortunately, this is a phenomenon that in its initial stages is completely reversible. The earlier the diagnosis is made, the earlier and easier the “recovery” takes place.